3 Ways to Get iPhone Emojis For Android without Root Most of the android users aren’t happy with the way emojis look on their device and they want to get the newest iOS emojis to their existing Android smartphone. well, Now anyone can easily try the following three methods in order to get the iOS emojis to your own Android phone.

Emoji was invented by the Shigetaka Kurita during 1998 while he was working in the NTT DoCoMo, where he was part of the intrepid i-mode team .Emojis are used widely in the new era of smartphone communication mediums such as WhatsApp, messenger and other messaging as well as social media applications

In This Article show
1. Why Get iOS Emojis for Android?
2. iOS Emoji vs Android Emoji
3. Steps to Get the iOS emoji for Android

Why Get iOS Emojis for Android?

We all use WhatsApp and other messaging services every single day. Frankly speaking, the Emojis on Android is not that attractive. First, we had blobs. Now we have gotten rid of blobs and replaced it with something else. God knows what is in store for Android users!

But, iPhone Emojis have stayed the same for a long time now. They are consistently adding new characters to the collection and it is ever growing! Now, we have a few easy ways to get iOS Emojis on Android devices. There methods in which you do not even need root! Go ahead and try them!

In the social media applications or messaging applications, emojis are most commonly used to express the feelings of the user, to a particular comment or message.

The reason why Android users need a new emoji is that Android emojis designs seem to be less attractive and outdated than the iOS emojis, while iOS offer emojis that are better in designs and they give an overall better experience to the user.

Steps to Get the iOS emoji for Android

There are several methods available on the internet, but most of them don’t offer the proper technique but instead, they all lead to installing some kind of third-party applications from the play store itself, you can follow our step by step procedure to get the newest iOS emojis to the Android OS

If you’re not interested in rooting your device then you can simply install the iOS emoji from the below-mentioned steps, however, every device will be having a default font in it and some of the phones like Samsung, HTC, Xiaomi, etc will allow changing the font in them, most of the phones running Android version 4.4 or above will allow the font changing feature.

Some devices from certain manufacturers or devices running older versions of Android may not allow the font changing feature, but they can try out the procedure 3 to install the emojis.

Step 2. Download the file called “Emoji Font 3.apk” from the below link and install it your android device.

Note: Emoji Font 3.apk is no longer available in the play store, just download and install it through the mentioned link

Step 3. The third step is to change the default font of your Android device. you can change it easily from the below-mentioned pathway within the settings menu.

Other phone users- Find out the option called ‘Font‘ within the Settings menu.

Step 4. You have completed the steps of installing iOS emoji to Android without any root access, Now you can download Google keyboard or another third-party keyboard from the play store and you can use the iOS emoji every time. It’s the proper method to get the iOS 10 emojis to the Android and this method will completely alter the default emojis to the iOS style, and it will also change the emoji source location from the phone.

Note: Your device must be rooted before trying this method.

Step 1. Download the Emoji Switcher App from Google Play Store by clicking below: 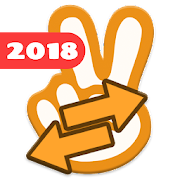 Step 2. Select the option called iOS 10.2 emojis from the given list and click on the “set” button, Multiple options will be shown in the options list, you can also check other options to try different emojis on your android device. Step 3. After installing the emoji you have to reboot the phone to apply the changes. Note: Rooting your device may void the warranty and also make the phone unstable if not done it properly.

If your phone does not support the font changing feature, you can certainly use this method in order to get the iOS styled emojis on your phone.This method is similar to that of the first mention method, but the only condition is that your device must be rooted before proceeding to this method.

Step 1. Download the Android application called “Emoji font 3.apk” and install it on your device.

Step 2. After installing it, download and install another application called iFont(Expert Of Fonts) from Google Play Store by clicking below:

iFont is the one of the best application available on the android, it can be easily used to change the fonts.

Step 3. After opening  ‘iFont’ application, click on to ‘My’ tab on the top navigation bar. Step 5. Now click on to the ‘SET’ and select the language as ‘English’, after that press OK button. Step 7. Reboot your device and enjoy the newly installed iOS styled emojis on your android device.

Note: You need to set the font mode to system mode in the iFont app by going to iFont>Mytab (from top navigation bar)>settings>change font mode>system mode.

These are the easiest methods to install iPhone emojis on your Android device.